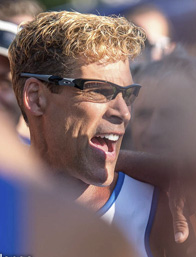 TIME magazine named Dean Karnazes as one of the “Top 100 Most Influential People in the World.” Men’s Fitness hailed him as one of the fittest men on the planet. An internationally recognized endurance athlete and NY Times bestselling author, Dean has pushed his body and mind to inconceivable limits. Among his many accomplishments, he has run 350 continuous miles, foregoing sleep for three nights. He’s run across Death Valley in 120 degree temperatures, and he’s run a marathon to the South Pole in negative 40 degrees. On ten different occasions, he’s run a 200-mile relay race solo, racing alongside teams of twelve.

His most recent endeavor was running 50 marathons, in all 50 US states, in 50 consecutive days, finishing with the NYC Marathon, which he ran in three hours flat.

Dean and his incredible adventures have been featured on 60 Minutes, The Late Show with David Letterman, CBS News, CNN, ESPN, The Howard Stern Show, NPR’s Morning Edition, the BBC, and many others. He has appeared on the cover of Runner’s World and Outside, and been featured in, to mention a few. He is a monthly columnist for Men’s Health, the largest Men’s publication in the world.

Dean is the author of 4 books, Ultramarathon Man, 50/50, RUN! and The Road to Sparta. His latest book is, A Runner’s High.

Powered by Khore by Showthemes